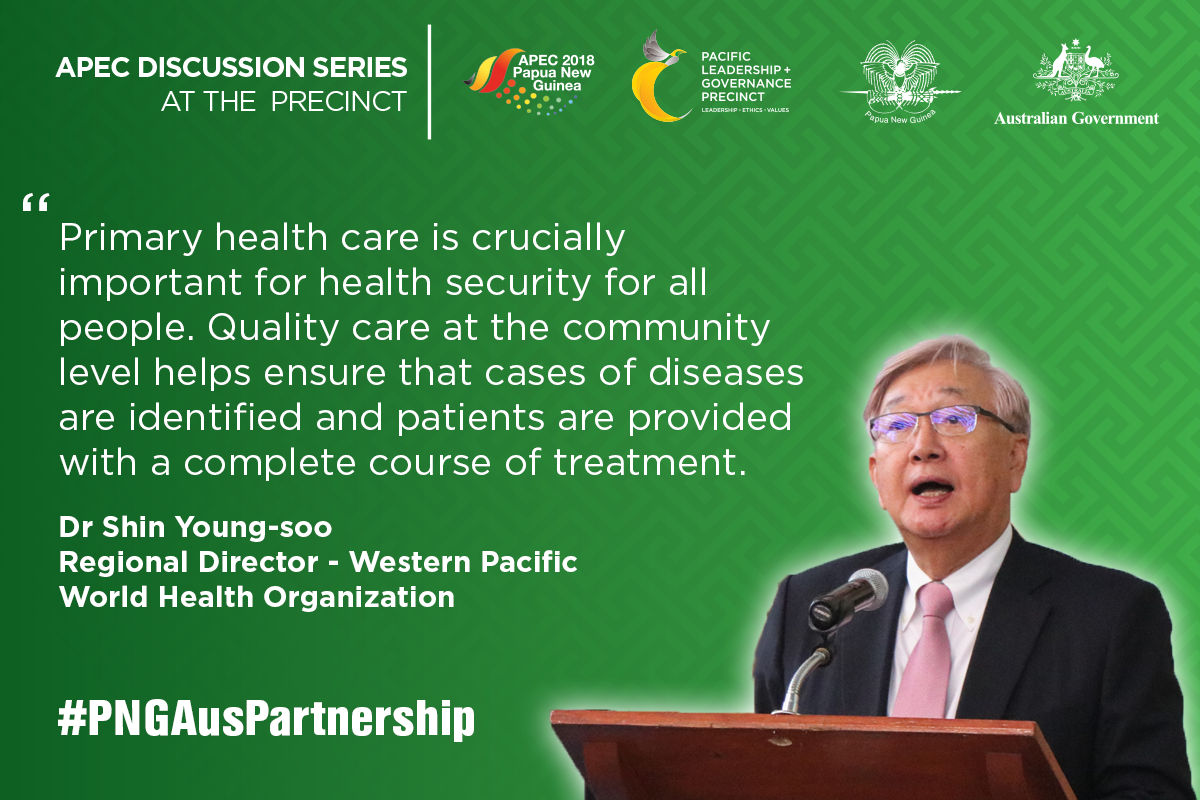 The Papua New Guinea public had their say on APEC Food Security week at the third event of the APEC Discussion Series at the Precinct, which was themed ‘Growing the nation: Agriculture, Inclusive Growth and Regional Opportunities’.

The event was held on Tuesday 7 August at the University of Papua New Guinea and included a keynote address from Grahame Dixie, Executive Director of Grow Asia, a multi-stakeholder partnership platform that catalyses action on inclusive agricultural development in South East Asia.

Mr Dixie said PNG can look to examples of South East Asian economies which have been able to kick-start their economic development by initially focusing on increasing the productivity of their smallholder farmers.

“The world is changing rapidly – creating both challenges and opportunities for farming. Agribusinesses need additional supplies of agricultural raw materials to supply the changing, expanding, and largely urban demand,” he said.

“The great opportunity is that agribusinesses have the capacity, through their buying power, to bring significant new sources of cash income into the rural economy – this is the fuel for eliminating rural poverty.”

Mr Dixie pointed to a case from Indonesia, where a coffee industry partnership between a major transnational corporation, nurseries, fertilizer companies, NGOs, certifiers, banks and local traders has lifted farmers’ harvests and improved the prices they receive.

He said this outcome was due to a combination of certification, competition and improved quality, and the tangible impact has been that around 20,000 farmers increased their coffee profits by more than 80 per cent – worth approximately US$12 million per year.

“There are problems that cannot be solved by an individual company or institution, but can be tackled cooperatively. “

The APEC Discussion Series at the Precinct will continue next week on Wednesday 15 August with a discussion centred on APEC Health Security Week and the theme ‘Ensuring the Region’s Health Security through Primary Healthcare’.

The series was launched in May and gives Papua New Guineans unprecedented access to visiting international experts and the APEC discussions taking place throughout 2018.

As the 2018 APEC host, Papua New Guinea will hold approximately 200 meetings with up to 15,000 delegates, including global business and government leaders, policy and technical experts and academics.

The Pacific Leadership and Governance Precinct is a partnership between Papua New Guinea and Australia to support the development of ethical and capable leaders.

A series of public events open to the public will explore APEC themes and policy issues relevant to Papua New Guinea and the Pacific.

Mr Azevedo said that rigorous studies suggest that the frequency and severity of natural disasters are likely to increase, and WTO members have started a dialogue on how trade policies and practices can help in dealing with natural disasters.

“The right policy can boost recovery by helping to improve supply-side capacity and restoring trade after a disaster. We have to get this right and contribute in any way we can,” he said.

Minister Pato said that the WTO continues to be a major contributor to increased levels of global prosperity. He further stated that the message Papua New Guinea wants to send as APEC host is that the world will be all the better for a steady, free, fair, inclusive, rules-based trading system.

The event also included a panel discussion with Dr Allan Bollard, Executive Director for the APEC Secretariat based in Singapore.

Dr Allan Bollard, reiterated APEC’s focus on ensuring there are good rules for international trade that will translate to improvements in living standards.

“Over the time that Papua New Guinea has been in APEC, since 1993, income per capita has doubled – you are roughly twice as well off as your parents. We want more of it and that’s been the story right around the APEC region – leading the world in terms of trade given growth,” he said.

“Both of our economies rely on a strong and open trading environment, and Australia continues to stand for a transparent world trade and investment system based on rules.”

The APEC Discussion Series at the Precinct is being held at the University of Papua New Guinea throughout 2018 hosted by the PNG APEC Secretariat and the Pacific Leadership and Governance Precinct, supported by the PNG – Australia Partnership.

The Papua New Guinea APEC Secretariat and the Pacific Leadership and Governance Precinct have announced a discussion series that will give Papua New Guineans unprecedented access to visiting international experts and the APEC discussions taking place throughout 2018.

Papua New Guinea’s APEC Ambassador Ivan Pomaleu said the APEC Discussion Series at the Precinct will look at APEC themes and policy issues that are important to Papua New Guinea and the Pacific.

“The APEC Discussion Series at the Precinct is a chance for people to engage with international policy experts,” Mr Pomaleu said.

“The discussions will cover many topics related to APEC including trade, tourism, mining and more. It is an opportunity to explore how international expertise can be applied in Papua New Guinea,” he said

As the 2018 APEC host, Papua New Guinea will hold approximately 200 meetings with up to 15,000 delegates, including global business and government leaders, policy and technical experts and academics.

Australian High Commissioner Bruce Davis said Australia is partnering with Papua New Guinea to ensure this is one of the most successful APEC years ever.

“Papua New Guinea is showcasing its culture, beauty and economic opportunities to the world as the host of APEC 2018.

“This year is also a chance for Papua New Guinea to take hold of the great trade and investment opportunities that exist in the Asia-Pacific region,” he said.

The first event in APEC Discussion Series at the Precinct will be held on 24 May and feature a keynote address from World Trade Organization Director-General, Roberto Azevêdo.

The Pacific Leadership and Governance Precinct is a partnership between Papua New Guinea and Australia to support the development of ethical and capable leaders.

It fosters discussion and debate on how to improve governance and service delivery at national, provincial and district levels, and encourages values-based decision making in the Papua New Guinea public service.

The venue for the series is the New Lecture Theatre at the University of Papua New Guinea. The University is a core partner of the Precinct and an historic home for discussions on topics of national importance.

The New Lecture Theatre was launched in March and constructed with support from the Australian Government.

To attend the inaugural discussion on 24 May, RSVP to info@pslrpng.org. Attendees are encouraged to arrive at the New Lecture Theatre at UPNG by 4.30pm for the 5pm – 6pm event.