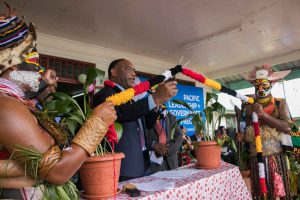 The launch of the District Training Roll-out coincided with the commencement of the PNGIPA Project Management short course for district-level public servants.

The course was supported by the Pacific Leadership and Governance Precinct, a partnership between the Governments of Papua New Guinea and Australia to support the development of ethical, capable public-sector leaders.

Public Service Minister Elias Kapavore said the PNGIPA and Precinct programs reach out to public servants across Papua New Guinea to provide them with tools to be more efficient and effective in their work.

“To meet our objectives as a nation we must have a culture of excellence and inspirational leadership in the public sector,” Mr Kapavore said.

“We are focused, as a Government, on providing more opportunities for the personal and professional growth of public servants.”

“We need public-sector leaders who are ethical, capable and inclusive, and this is being achieved by PNGIPA, the Precinct and the partnership between Papua New Guinea and Australia.” 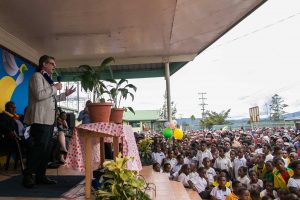 Australian High Commissioner Bruce Davis said that providing regional public servants with opportunities to develop their technical capabilities and leadership skills was a priority of the PNG-Australia Partnership.

“Public servants take responsibility for the delivery of vital services in every corner of the country,” Mr Davis said.

“We want to better enable District leaders to drive service delivery at the local level, and involve citizens and communities in identifying their own economic opportunities and development needs.”

Secretary for Department of Personnel Management, John Kali also said public servants on the ground carry the reputation of the government.

“In my forty years with the public service my simple motto has been: ‘serve the people’”

“There’s no magic about it – we want to give public servants the tools to serve our people in the Districts and Local Level Governments.

“We are giving ethical, values-based leaders the opportunity to rise-up, step up and speak up.”

The course is being co-delivered by Papua New Guinean and Australian trainers, as part of PNGIPA’s Precinct partnership with the Australian Public Service Commission.

In 2017, more than 200 public servants from the provinces and districts took part in Precinct courses.