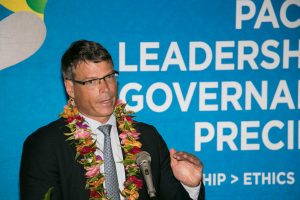 Ambassador Patrick Suckling speaks to the audience about the Paris Agreement and the role of Papua New Guinea as an international and regional leader on climate change.

Australian Ambassador for the Environment Patrick Suckling noted that Papua New Guinea had played an important leadership role on climate change issues, as international negotiations continue on the implementation of the Paris Agreement.

Mr Suckling gave the keynote address at The Paris Agreement and Climate Change Leadership in the Pacific, a discussion event hosted by the University of Papua New Guinea (UPNG) and the Pacific Leadership and Governance Precinct on 30 January.

An audience of public sector, academia, non-government organisations and civil society representatives took the opportunity to participate in a lively discussion on the local, regional and international responses to climate challenges.

Mr Suckling said that the effects of climate change are disproportionately affecting vulnerable communities in the Pacific and Papua New Guinea had a strong voice and a vital role to play on global climate change policy.

“With the Paris Agreement, over 190 countries recognised there is a problem and agreed to act, to act urgently and to act together,” he said.

“Leaders in the Pacific speak with great moral authority and this resonates with the international community.

I’ve heard there are communities in Papua New Guinea having to relocate because of rising seas and others that are challenged by severe weather events, such as heavy rainfall and flooding.”

“Regional leaders, including successive Prime Ministers of Papua New Guinea, have advocated for strong action and practical solutions to the challenges of climate change.”

“Australia and Papua New Guinea have worked together over many years to address the threats of climate change, for example climate proofing infrastructure like roads and building community resilience.” 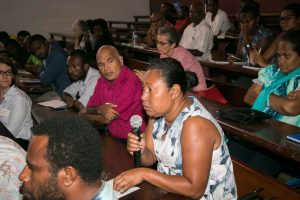 An engaged audience from the public and private sectors, academia, non-governmental organisations, and civil society put questions to Ambassador Suckling.

Papua New Guinea and Australia are signatories to the Paris Agreement, an accord to take action to reduce emissions as a means for preventing the global temperature from rising more than two degrees.

As Ambassador for the Environment, Mr Suckling represents Australia on global environmental issues, including negotiations under the United Nations Framework Convention on Climate Change.

Mr Suckling said that there was wide consensus around the world regarding the Paris Agreement and that everyone must play a role, including representatives from the private sector.

“Corporate business is getting on board with this agenda more than ever before,” he said.

“They are increasingly aware of the risk of climate – how to adapt, change and be robust – and they are also focused on the opportunities of a changing global economy based on lower emissions and climate resilience.

A lot of countries and a lot of companies are saying that this is big business. Many countries are demonstrating that you can reduce emissions and grow the economy. On some estimates meeting climate change commitments by just the key emerging economies is a $23 trillion opportunity.”

The Paris Agreement and Climate Change Leadership in the Pacific was hosted by UPNG and the Precinct in order to facilitate discussion on public-policy challenges and opportunities, and on how ethical leaders can support positive change for communities in Papua New Guinea.

UPNG is a core institution of the Precinct, a partnership between the Governments of Papua New Guinea and Australia to strengthen the public sector and promote leaders who can develop and implement effective public policy.